Water has always been a source of danger for humans. The water element, as a rule, is sudden and unpredictable, and measures to protect against it must be the same reactive. The enterprise "Rassvet-K" developed quickly erected flexible dams, which can be temporarily used for the liquidation of emergency situations (ES) for the period of the installation of basic protective structures, allowing to gain time for the evacuation of people from the disaster zone. 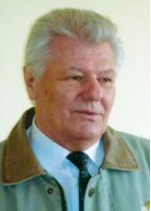 Water has always been a source of danger for humans. The water element, as a rule, is sudden and unpredictable, and measures to protect against it must be the same reactive. The enterprise "Rassvet-K" developed quick-erect flexible water-filling dams, which can be temporarily used for the liquidation of emergency situations (ES) for the period of the installation of basic protective structures, allowing to gain time for the evacuation of people from the disaster zone.

+Taking into account that natural disasters are quick events in time, temporary hydraulic structures, which include flexible water-filled dams, should have a low mass, transportability, fast erecting, the possibility of multiple installation in various places with minimal costs. The water-filling dykes, referred to in this article, are flexible, flat-clad shells up to 50 m long, perimeter up to 15 m. In a form filled with a working medium, they have a diameter of up to 5 m. High-strength synthetic materials of domestic production are used as the power elements of the shell.

The basic sizes and characteristics of elastic water-filled dams are given in tab. 1. 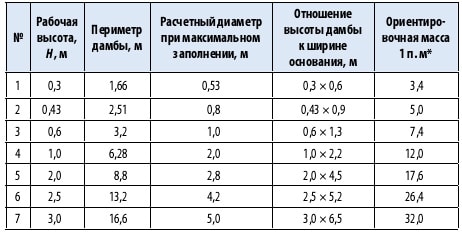 Ploskorvorachivaemost data of water-filled dykes allows them to be transported by wound napetsialnye drums by almost any means of transport, including aviation.

The time of installation of such a water-filled dam is commensurate with the speed of the vehicle on which this drum is mounted. Prefabricated flexible water-filled dams can be used to protect objects in the coastal zone from natural disasters associated with rising water, floods on rivers or cataclysms in the sea, for erecting temporary barriers, for example, water dams, etc.

In pic. 2 shows the industrial tests of a flexible water-filled dam in Krymsk, Krasnodar Territory, which covers the hydro-channel during its repair.

The protective hydraulic engineering works as follows. On the shore, in the place of the expected rise of water, a closed shell is unwound from the roll or from the coil, into which water is pumped from the water source through the flexible filling pipes. The pump is selected in accordance with the forecast of the speed of approaching a natural disaster. For a stable position, the shell is filled with water no more than 75% of its maximum volume, so that the following condition is preserved:

After filling with water, a flexible water dam does not require special fastening on the foundation foundation, because due to its weight, it maintains a stable position under the influence of external loads. After the work is finished, the dam is dismantled: the shell is freed from water, rolled up and transported to a new location. The tests carried out confirmed the effectiveness of the dam.

One of the distinguishing features of these flexible water-filled dykes is the manufacture along the entire perimeter of the flat reinforcement belt (pic.1, pos.2) with holes. The presence of this reinforcement belt makes it possible to install, if necessary, extensions with anchors for additional attachment of the dam at the site of its installation, and also to arrange other types of dams from the shells indicated in table 1 (pic. 1, 3). 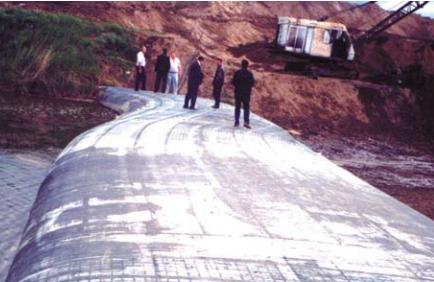 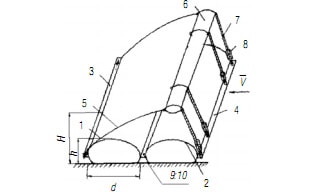 The proposed design allows to reduce the time of installation and dismantling of the dam, to increase its stability. The originality of the proposed dam design is that it is implemented as separate modules, which are a combination of closed, flexible cylindrical shells (pic.3, pos.1, 2) filled with water, where each of the shells has elastic reinforcement ribs (pic. 3, pos. 3, 4, 9, 10) along the generators.

The shells are interconnected by internal ribs (9, 10) to the "eight", and the open flexible membrane (5) is rigidly fixed at its lower edge to the outer edge (3) of the "eight", the upper edge of the membrane is connected to the float (6), flexible braces (7) can be adjusted in length by means of a strop-closing device (8).

The novelty of the adopted decisions made it possible to obtain a patent for the invention "Protective Hydraulic Engineering" of reg. No. 2291931. A patent for the invention of the reg. No. 1 was received on a floating pipe with pneumatic floats and a method for manufacturing it. No. 2358178. In pic. 4 and 5 show the individual elements of the "Protective hydraulic structure".

Laying a flat long-length closed shell or a pneumatic float on a coil is as follows (pic. 6). The first flange of the shell fits into the cavity of the pipe (5), the diameter of the pipe (5) determines the initial diameter of the winding. The second flange (6) is fixed with a cable (3) after the end of winding. All these products are designed for work in an aquatic environment. Therefore, when choosing the material for power frames, it should be borne in mind that some synthetic fabrics, when in water, change their original strength characteristics. In pic. 7 shows the dependence of the strength of viscose and polyvinyl alcohol cord fabrics on their residence time in water. 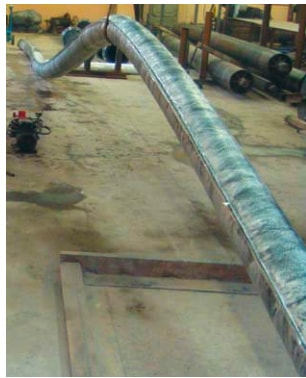 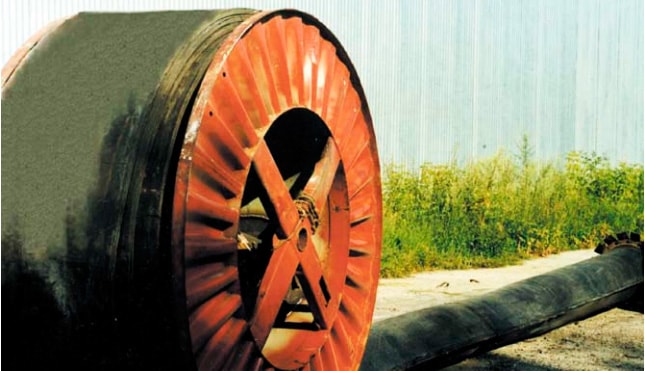 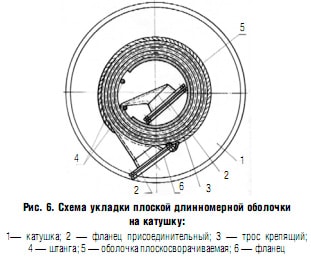 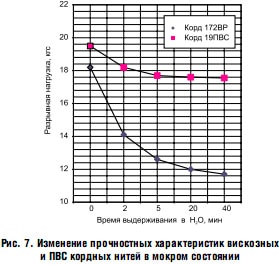 As can be seen from the graph, the strength of PVA filaments when in water is reduced by only 8-9%, and the elongation at loading remains constant. At the same time, viscose yarns lose their strength by almost 35%, and the elongation increases to 17%. Thus, cords based on polyvinyl alcohol fibers have the advantage.

Similar flat-folded long-length casings can be used as primary casings when waterworks are built up by means of hydromechanization or as on-shore pipelines.

In the case of mechanical damage to a flat shell, repairs in the field are carried out as follows. From the end of the shell cut a piece (for example, 1 m), which serves as a clutch. The damaged area is degreased, greased with adhesive composition. On the damaged site, the coupling is pulled, the load is placed on the damage site and maintained for the required time. It is possible to repair with the help of an ordinary car vulcanizer using the same technology as repairing car cameras.

LLC "Rassvet-K" offers its partners high-quality and technological products. We hope for fruitful cooperation in the field of development and introduction of new products in hydromechanization.

For more detailed information on the application of our products, please contact the Research Director of Rassvet-K firm, Candidate of Technical Sciences, Professor Chizhov Anatoly Evgenievich.